You can express your concerns regarding the proposed 7-11 at 6210 Franklin Ave by emailing the Los Angeles City Planning department & the case managers in charge of these permits. There are two numbers and managers for this proposed development:

A sample email for you to customize as needed is below. Make sure to add the case numbers to your email's subject line.

THANK YOU FOR YOUR SUPPORT.

As a resident of this area I would like to formally and strongly voice my opposition to the proposed 7-Eleven at 6201 Franklin Avenue (case numbers ZA-2020-7462-CU and ENV-2020-7643-CE). This project threatens the livelihoods of our residents and our local businesses, including our existing locally owned convenience store.

On February 6, the project to build a 7-11 at 6201 Franklin Avenue was formally reviewed by the Hollywood United Neighborhood Council. Following a presentation by a representative for 7-Eleven that was completely without both concrete data and much-needed information (I.e. traffic reports, crime data from the other nearby locations, etc...), the council opened the floor to hear concerns and oppositions from the community. After nearly an hour and a half of public objections, the council called for a vote from those in attendance to gauge public interest in the project. The community voted in an overwhelming majority against allowing a 24-hour 7-Eleven to be developed in our neighborhood.

On February 8th, after reviewing more public concerns and hearing from the owners of several local businesses, the neighborhood council formally voted to deny 7-Eleven’s request for permits. The neighborhood council also agreed to send their strong recommendation to NOT allow any 7-Eleven to be built in our community north of Franklin ave to the L.A. City Council. The residents of our neighborhood firmly stand with our Neighborhood Council’s decision and want to ensure these objections are thoroughly considered by the city.

Also at the February 8th neighborhood council meeting, Ariel Guittierez (the representative for 7-Eleven’s permit applications), claimed that this project was a “gift” for our neighborhood to “make it a better community.” This is a blatant falsehood. There are already two other 7-Elevens within a half mile. Building a third would not “help our community,” but rather cause an exponential increase in traffic, traffic accidents, crime, and pollution, all while irrevocably harming our neighborhood small businesses.

Since Mr. Guittierez had no concrete data to offer, allow me to simplify this for you—the existing 7-Eleven’s within a half mile radius have a 2 and 3-star rating on Yelp, respectively. Hollywood Super Mart has had a perfect 5-stars for years. And they did that without "lighting" or "24 hour security guards” and while supporting other California brands.

COVID-19 has already claimed several small businesses in our area. Thai Pepper and Coffee Shop 101, restaurants which had been in our community for over 30 years and sit next door to the proposed site in question, were forced to permanently close their doors. What 7-Eleven is doing here is painfully obvious—they’re seeing our neighborhood’s suffering as nothing more than an opportunity to encroach on a residential area and creep further into the quiet neighborhoods north of Franklin ave. The data is clear, corporate franchise chains like 7-Eleven do not add value to the communities they inhabit. Their profits are outsourced while our community is degraded.

I urge the City Council to protect our local businesses, protect our community, and support the dreams and hard work of small businesses who make our communities better places to live. We know that Councilmember Raman knows how vital of a role these businesses play in Los Angeles, and how this city should be fighting to protect them at all costs.

Thank you.
[YOUR NAME]

Our hearing with the Area Planning Commission went exceptionally well! We've logged a BIG WIN! Stay tuned for more updates about what comes next.

Add your email to recieve updates on case developments

We are a group of Franklin Village, Beachwood Canyon, Hollywood Dell, & Hollywood Hills residents strongly opposed to the proposed 7-Eleven at 6201 Franklin. We are prepared to go all the way to City Council to fight this small business & community killer.
Read our Statement of Opposition. 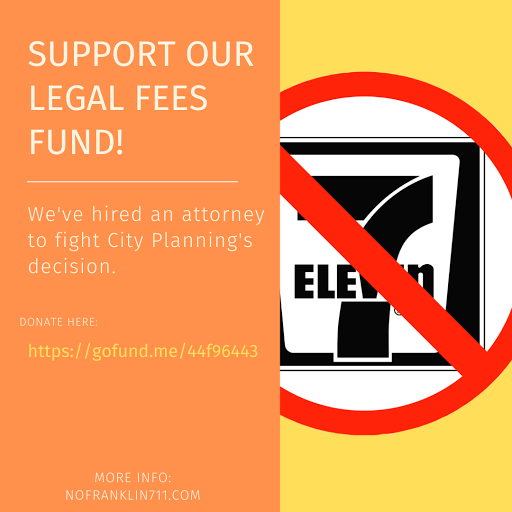 Support our legal fund as we appeal City Planning's decision & fight 7-Eleven all the way to the top!